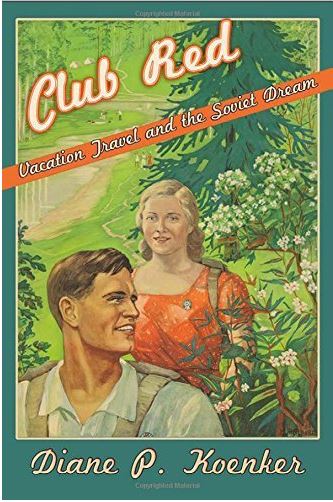 The Bolsheviks took power in Russia 1917 armed with an ideology centered on the power of the worker. From the beginning, however, Soviet leaders also realized the need for rest and leisure within the new proletarian society and over subsequent decades struggled to reconcile the concept of leisure with the doctrine of communism, addressing such fundamental concerns as what the purpose of leisure should be in a workers’ state and how socialist vacations should differ from those enjoyed by the capitalist bourgeoisie.

In Club Red, Diane P. Koenker offers a sweeping and insightful history of Soviet vacationing and tourism from the Revolution through perestroika. She shows that from the outset, the regime insisted that the value of tourism and vacation time was strictly utilitarian. Throughout the 1920s and ’30s, the emphasis was on providing the workers access to the “repair shops” of the nation’s sanatoria or to the invigorating journeys by foot, bicycle, skis, or horseback that were the stuff of “proletarian tourism.” Both the sedentary vacation and tourism were part of the regime’s effort to transform the poor and often illiterate citizenry into new Soviet men and women.

Koenker emphasizes a distinctive blend of purpose and pleasure in Soviet vacation policy and practice and explores a fundamental paradox: a state committed to the idea of the collective found itself promoting a vacation policy that increasingly encouraged and then had to respond to individual autonomy and selfhood. The history of Soviet tourism and vacations tells a story of freely chosen mobility that was enabled and subsidized by the state. While Koenker focuses primarily on Soviet domestic vacation travel, she also notes the decisive impact of travel abroad (mostly to other socialist countries), which shaped new worldviews, created new consumer desires, and transformed Soviet vacation practices.