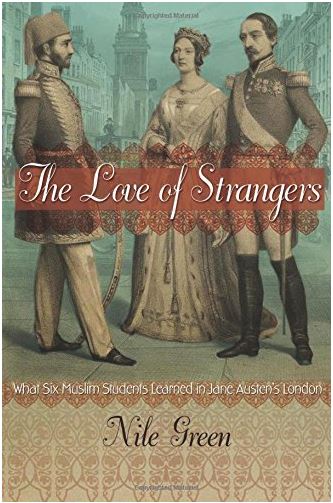 In July 1815, six Iranian students arrived in London under the escort of their chaperone, Captain Joseph D’Arcy. Their mission was to master the modern sciences behind the rapid rise of Europe. Over the next four years, they lived both the low life and high life of Regency London, from being down and out after their abandonment by D’Arcy to charming their way into society and landing on the gossip pages. The Love of Strangers tells the story of their search for love and learning in Jane Austen’s England.

Drawing on the Persian diary of the student Mirza Salih and the letters of his companions, Nile Green vividly describes how these adaptable Muslim migrants learned to enjoy the opera and take the waters at Bath. But there was more than frivolity to their student years in London. Burdened with acquiring the technology to defend Iran against Russia, they talked their way into the observatories, hospitals, and steam-powered factories that placed England at the forefront of the scientific revolution. All the while, Salih dreamed of becoming the first Muslim to study at Oxford.

The Love of Strangers chronicles the frustration and fellowship of six young men abroad to open a unique window onto the transformative encounter between an Evangelical England and an Islamic Iran at the dawn of the modern age. This is that rarest of books about the Middle East and the West: a story of friendships.